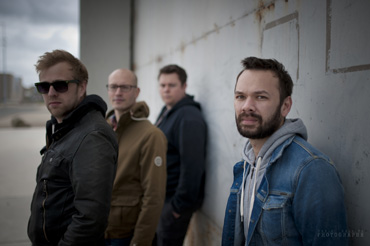 At the end of 2010, Kill Me This Monday played their first live gig opening for MOPA. They played the way the band was built and the way they like things done: under pressure, with no nonsense, and in all humility.

This young band was built around two old friends who have been playing together for more than 15 years; a discreet but efficient drummer (Johan), and a much less restrained guitarist (Thomas). The duo found in Stéphane (bass) an ideal companion, who added an undeniable groove, however, something was clearly missing. That something, that hint of craziness, that would allow the band to dare to try new things.

And then Alex arrived…

With a growing experience of live shows, it started to become clear that something was missing; an album, the necessity to leave a trace of these memories, this friendship. After a personal approach and then backed by Dream On productions, contacts were made with the label KLONOSPHERE.

A fundamental need to immortalize for others, this music, a crossroads between what could have been today’s grunge, or rock, or even something else. It’s difficult to resume Kill Me This Monday to one style, but easier to identify common values between the four band members: Thrice, Deftones, Nirvana, Radiohead, Cult of Luna. Truthfully, if they were questioned, no one would admit to the same influences.

Kill Me This Monday is, above all, a bunch of friends who endeavour to mix groove, melody, and high gain guitars. Putting things simply, a rock band.

A punch in the face whilst crying is probably the best way to describe their music.

Playing loud, but with overtones. This determination is expressed by the addition of samples, leaving a door open to new sounds but without making them the backbone of the music; energy creating atmospheres.

Signed up with a label, an album coming out (April 3rd 2015), gigs, a loyal following (and others still to be convinced) to accompany them, endless nights playing music; all in all evolving as a band. 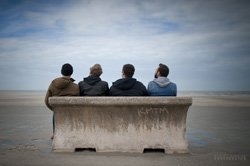